GTX Gaming is one of the oldest game server hosting companies around. They offer a wide variety of games (100+), 24/7 support, and low latency, all for an affordable price.

Seems too good to be true - but how do they hold up to their claims?

If you want the quick answer, GTX Gaming is a terrific company that I highly recommend.

But there’s way more to it than that.

Let’s dive in to the GTX Gaming review!

A good game hosting company needs to deliver on a few key principles to keep their customers happy:

1. Performance: First and foremost, their servers need to run well. That’s the whole point of paying for server hosting, after all.

2. Support: Even game hosting experts will run into issues from time to time, and that’s where the company’s support team comes in. 24/7 responsive support is a must these days, especially when a gamer is eager to get their server up and running.

3. Control Panel & Mods: The server’s control panel should be robust and flexible yet easy-to-use and customizable. Nobody wants a control panel that’s impossible to figure out, nor should it be so simple, it’s useless. A good control panel gives you all the tools necessary without making things overcomplicated. Features like one click mod installations, plugin support, etc. are always nice.

4. Value: Like all things in life, you get what you pay for with game server hosting. You don’t want to skimp and have a terrible experience, but there’s no need to spend hundreds each month for most people. Choosing a hosting company with the best bang for your gaming buck is crucial!

These are the main four pillars I kept in mind when testing and reviewing GTX Gaming’s servers.

Matthew started the company as a hobby, but the company grew quickly. He quit his full time job after just three months.

According to GTX Gaming:

We are dedicated to working hard on making GTX the best option for game server hosting while always sticking to the key objectives we started with. They are fast, friendly support, affordable pricing structure and always being ahead of the competition in terms of hardware power and developing new technologies to make the gaming experience as easy as possible.

Let’s see how they hold up to expectations in the rest of our review.

Here are some of their most popular supported locations:

GTX Gaming is one of the biggest game hosting companies in terms of supported locations, dwarfing smaller companies like Host Havoc.

GTX Gaming’s global support makes them a good option for customers around the world.

Their game servers have a unique control panel for each supported game to make your life easier. They also offer VPS servers, dedicated servers, Teamspeak 3 servers, and web hosting.

I only tested their game servers and cannot speak to the quality of their other server types, but I imagine performance is similar if not better.

Besides, most of their customers buy game servers anyway. 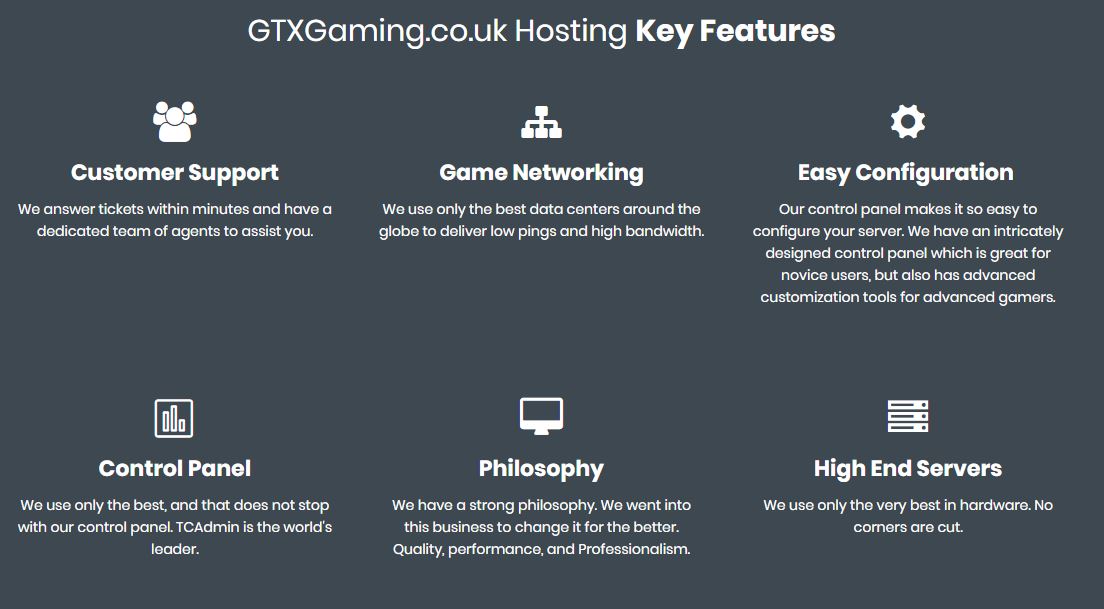 Game switching is one of my favorite features, which allows you to essentially ‘trade in’ your server when you want.

The game switching feature allows you to trade your game server out for any other game, for whatever reason, whenever you want, free of charge.

That means you can switch between game modes or mods, or to a different game altogether.

Lastly, their control panels are designed custom for each game, and support easy mod installs with automatic updates on some titles. 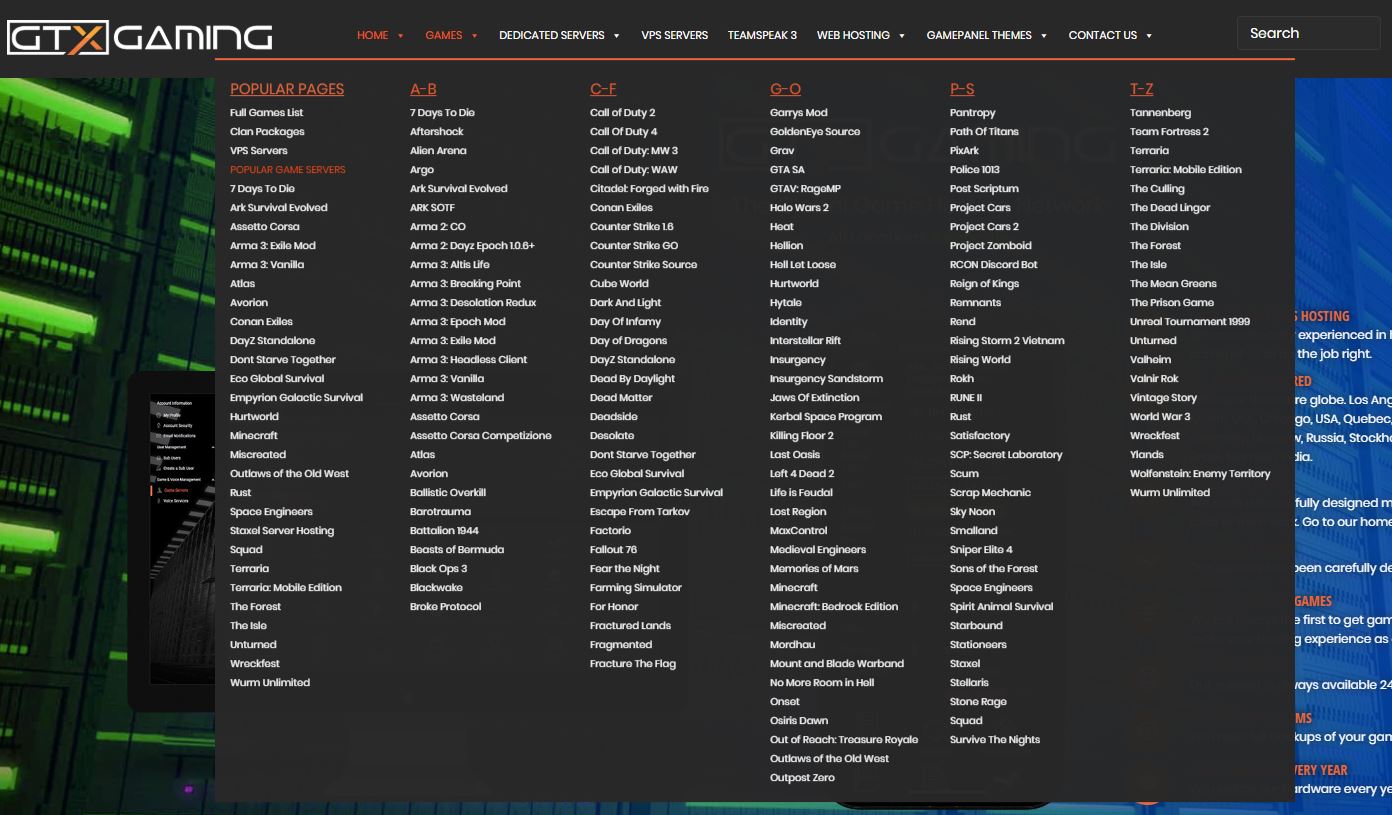 GTX Gaming supports more than 100 different games and mods, with custom control panels for each.

I found GTX Gaming’s support to be quite helpful, both via their live chat and email.

When I had some questions about their servers, a representative from their support team was on the line back and forth for a solid ten minutes until all of my questions were answered.

Likewise, when I submitted several email support tickets, I received help within the hour.

Their support team wasn’t as quick to respond to my ticket as PingPerfect (they responded in minutes) but I found their response time to be adequate nonetheless.

I tested their Rust server with ten of my friends - it was a small slot count, but overall the performance was stellar.

The server was running several plugins and didn’t lag at all with ten players in at once. I can’t speak to their high slot count performance, but the server suited my needs just fine.

Other customers have had similar positive experiences. I joined the GTX Gaming Discord channel to ask some others what their experience was like.

Here’s one of the answers I got:

We're loving it. We're a family of 6 that plays together so they make it really easy for even us casual people. They're not without issues (who is, especially right now with everyone online) but they take amazing care of us. We don't pay extra for faster response because really there isn't a need. I can't recommend them enough.

Another user was also pleased, although they had a few minor complaints which I also noticed when testing out their servers. Here’s what he said:

Hey! I've been pretty pleased with them so far. Other than the one night with instability, they've been pretty good. I do wish they had more instruction on how to setup the server, that was a bit frustrating but I do feel like that's an area most server companies are lacking in. To their credit, when I was getting frustrated with a setting, I emailed support and within 10 minutes they had solved my issue. It can get a little shaky in the evenings, about the time everyone is getting on. The rest of the day though, we've not noticed anything.

GTX Gaming says they use i9 CPUs in their servers which provide unparalleled quality and performance. I didn’t notice any difference between their servers’ performance and PingPerfect’s or Host Havoc’s, but my experience was positive with all of the companies, so I’m not complaining either.

All of GTX Gaming’s servers are hosted on SSD drives, which are far faster than old, slow HDD drives.

This isn’t advertised on the website, but according to Server Mania, GTX Gaming actually uses infrastructure.

Server Mania is one of the most well-known and trusted server hosting companies around. Server Mania has game servers and dedicated servers that use the latest hardware, ensuring low latency and global connectivity.

All in all, you won’t need to worry about performance issues with GTX Gaming in a small to medium sized game server. And if you’re running a large public server with 80+ players, you can go for one of their dedicated servers to ensure top-notch performance. 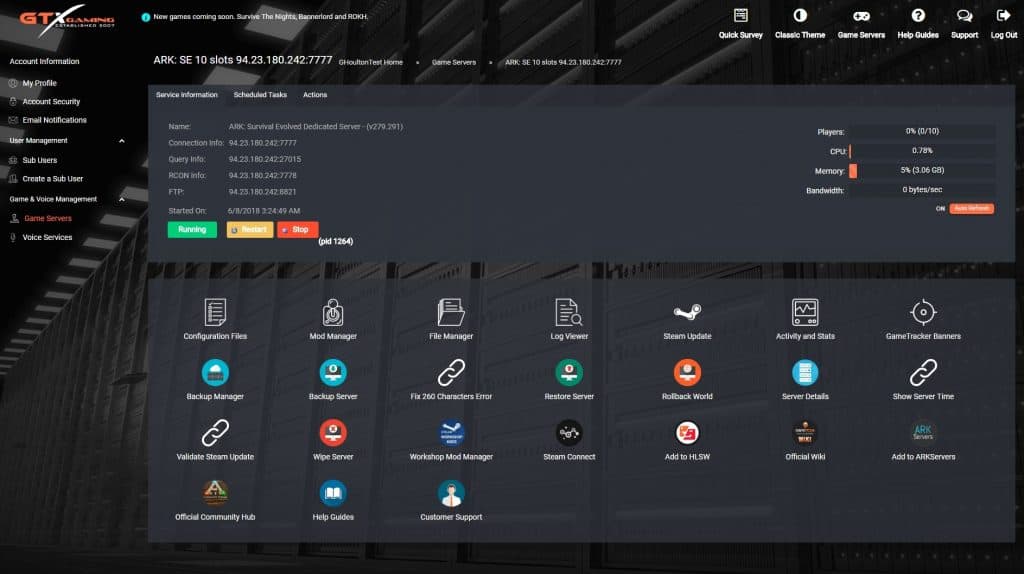 GTX Gaming has custom control panels specifically designed not only for each game, but in some instances, different mods as well. For example, they have at terrific control panel for the Arma 3 Exile Mod, which is jam packed with features.

The control panel makes it easy to change settings with drop-down menus and they also have ‘tick to enable’ menus, which are great for beginners and veterans alike. GTX Gaming has developed their custom control panel based on TCAdmin to be “as easy to use as possible”.

Most hosting companies - at least the good ones - have a knowledgebase to help their customers configure their servers.

Knowledgebases range from incredibly informative to non-existent. I’d say GTX Gaming’s knowledgebase is somewhere in between, at least for the game I was testing.

I was testing a Rust server, which has 25 helpful pages in their knowledgebase answering common questions and giving tutorials. In fact, most of their games have a ton of tutorials. 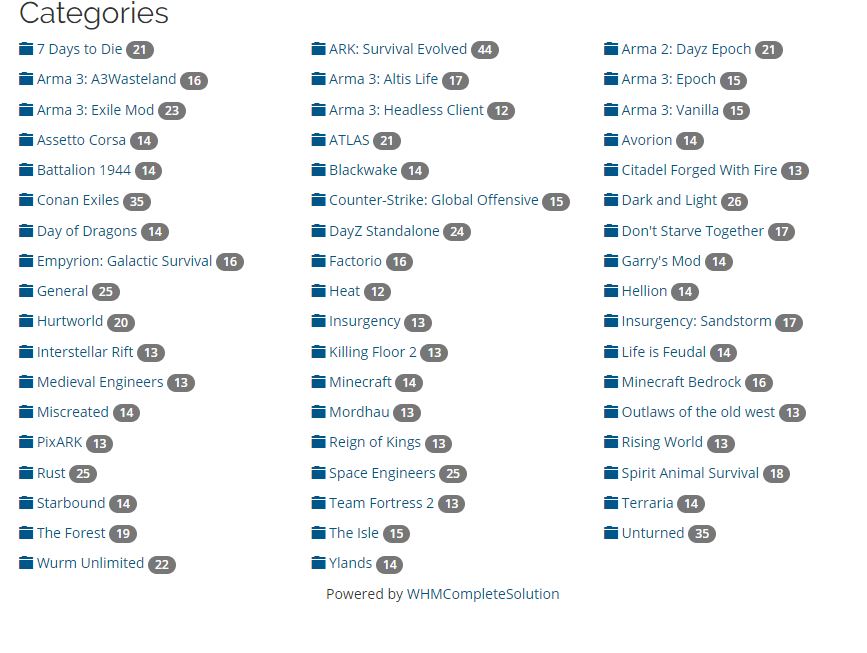 Some companies focus on their best sellers and neglect the rest, but GTX Gaming seems to have a pretty solid knowledgebase all around, based on questions their support team was regularly receiving.

However, their tutorials are simply plain text lists of steps, without any images to help illustrate the process. It was enough for me to figure things out, but I’d say I’m comfortable with technology and problem solving coming from a computer science background.

For a total noob, however, it may be hard to understand. Most hosting companies are lacking in this department, but still, I’d like to see step-by-step tutorials with images added to the knowledgebase. That’s my only complain.

All in all, their knowledgebase has sufficient tutorials, and if you’re still having trouble, their 24/7 support has your back.

GTX Gaming’s competitive pricing is probably one of the best parts about the company. Their great performance, worldwide coverage and 24/7 support are awesome, so you’d think they’d charge an arm and a leg for hosting.

GTX Gaming’s servers range in pricing - you can pay extra for add ons and higher slot counts (obviously), but they’re actually one of the cheaper providers out there.

Offering servers on par with the cheap pricing of PingPerfect, GTX Gaming is incredibly competitive. However, PingPerfect does offer free web hosting with all of their game servers, which is nice. But GTX Gaming is still pretty darn good.

Above we talked about four factors, one of which is bang for your PC gaming buck, and I have to say GTX Gaming has hit the nail on the head.

Overall, I really like GTX Gaming - they have great servers at a fair price, custom control panels and a helpful support team.

They also have a wide variety of supported games and one of the largest hosting networks in the game server hosting industry, meaning you’re probably living in a supported country.

GTX Gaming hits all four aspects of a good hosting company: performance, ease of use, support, and value.

They’re one of the largest, most reputable game hosting companies as well, which goes a long way with me as well.

Firstly, I didn’t love their knowledgebase. While it was comprehensive in that it covers all of their games, they don’t have any images. Most companies don’t, but I don’t think it would kill them to go above and beyond the call of duty for their customers.

Again, I was able to follow the instructions for the most part without a problem, but it seems like they could’ve put in more effort to make the guides extra helpful. Plus, it’d probably save them money too, as they’d presumably spend less on support.

Speaking of support, their live chat support was good, but it took them much longer to respond to my email support ticket.

I eventually heard back, but I think that’s a pretty long time to wait considering PingPerfect and Host Havoc responded in minutes.

And when you’re an eager gamer excited to launch their server and play with friends, it’s frustrating to hit a road block with nobody to help you through the issue.

GTX Gaming is one of the best game hosting companies aronud. If you’re interested in renting a game server, you can’t go wrong with them.

Hopefully this review helped you out! If you have any extra questions, please feel free to contact me for more information.