A lot of people new to building gaming computers may wonder if buying an NVME drive is worth the extra money.

So, is an NVME drive really worth it?

If we’re gonna be straight with you, an NVME SSD will not increase your performance in games, at least FPS wise. But there are a couple of other things it can help with when it comes to gaming.

First off, what is NVME? NVME (or non-volatile memory express) is an ultra-high-speed storage protocol that greatly increases the transfer speeds of SSDs.

Flash storage is already much, much faster than traditional mechanical hard storage, but NVME takes it a step further.

An SSD, when searching for data while reading and writing, takes a look at all the data present and grabs exactly what it needs, right?

A mechanical drive does the same, but much slower due to its mechanical arm physically having to find each individual piece of data and then reading or writing.

The best way we can look at the NVME interface for SSDs is like this:

A regular SSD takes the command, searches for the data, finds the data, and reads or writes.

On the other hand, an NVME SSD can take tons of commands all at once, search for all that data (at the same time), and read or write simultaneously.

It’s like having a ton of little faster drives working as one!

NVME vs SATA SSD for Gaming

An SSD will not increase your FPS in video games as long as they’re relatively modern titles.

What an SSD can help improve, however, are your load times.

Load times are to gamers what ducks crossing the road are to truckers, a momentary hindrance that feels like an eternity.

Ask anyone who has played Grand Theft Auto 5, The Elder Scrolls V: Skyrim, or any Just Cause title and they’ll tell you the same thing - loading times suck!

Going ahead and grabbing at a side by side comparison of SATA SSD vs NVME SSD, we’ll look at the difference in loading times between a couple of different game titles when running either SSD type. 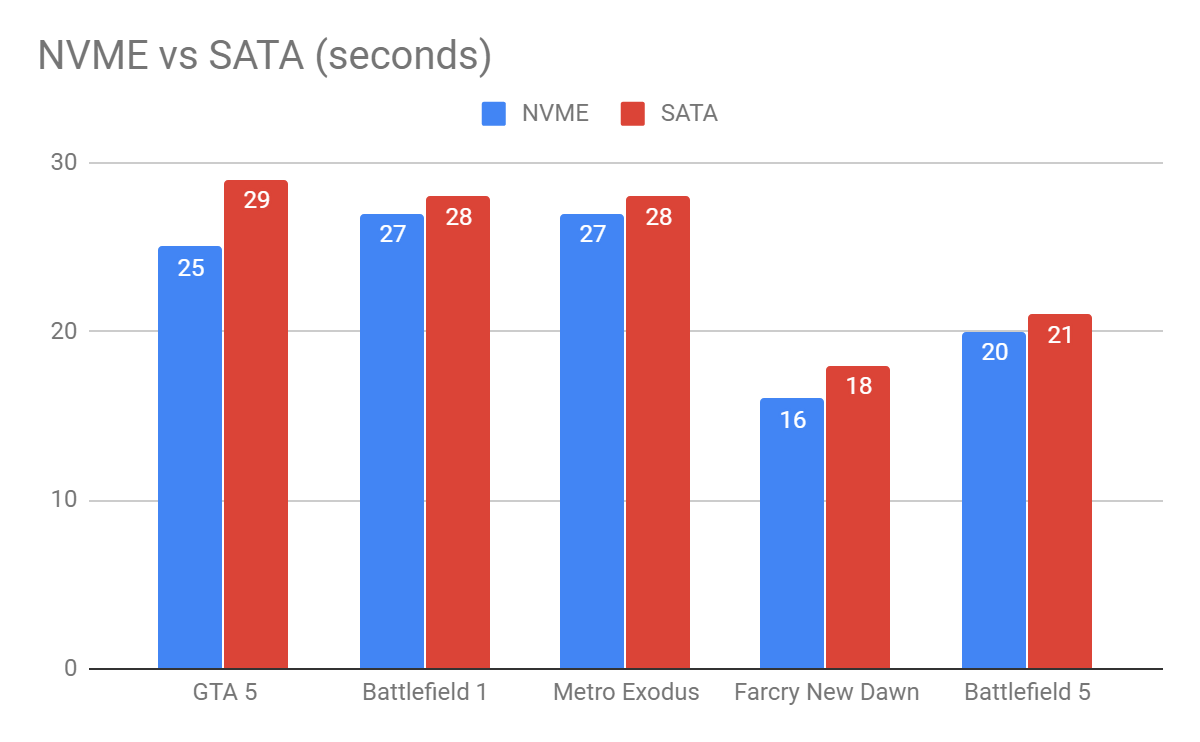 One of the main draws of SSDs is the amazing boot times compared to that of traditional hard drives.

Since an SSD has the luxury of not having to search tirelessly for each individual piece that makes up your Windows boot, it can get up and go quickly with relative ease.

In this comparison, we’ll show you the boot time difference between a SATA SSD, an NVME SSD, and a mechanical HDD when booting into Windows 10 Home.

Again, results not surprising when compared to an HDD, but very close when comparing the SATA and NVME drives.

If these drives are so close in non-synthetic workloads, then why do the statistics show that they perform on such a different playing field?

Well, allow me to explain. NVME drives are going to be your option when working with very large single files.

Say you’re working with 4K, 8K, or 16K footage and you need to edit it as efficiently as possible, no way you’re using a standard SATA SSD. 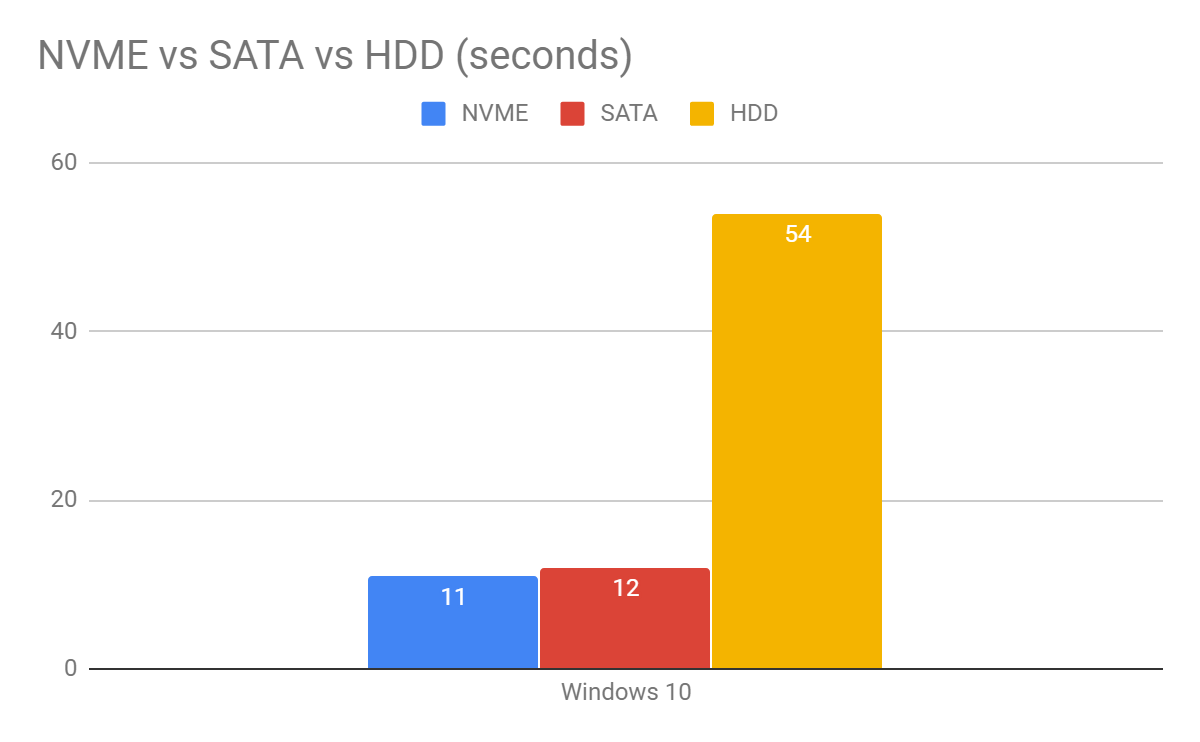 Now for games, and booting Windows, you might as well stick with the cheaper option.

There’s no real reason to pay $10-30USD extra for a 1-second difference.

What’s The Difference Between NVME and SATA SSDs?

Let’s start by looking at PCIE compared to SATA. PCIE, when compared to SATA in storage space, is just about two times faster than SATA (not accounting for PCIE 4.0). So NVME, should be similar right? NVME is not PCIE.

However, NVME is an interface for PCIE devices.

For example, the Samsung 970 Evo Plus NVME drive. While it uses PCIE as its primary connector, it is its own controller.

Going off of average sequential read and write speeds, NVME actually beats out SATA and PCIE by just about 5 times!

That’s freakin’ crazy. How could we even begin to compare NVME to SATA drives at that point?

Well, we can compare them, but let me tell you it’s no contest.

The maximum possible transfer speed for SATA 3 at this current point in time is 600MB/s (that’s megabytes).

In contrast, the maximum possible transfer speed for NVME reaches upwards of 16GB/s (that’s gigabytes!), and that’s not even the end of it.

According to techtarget.com, some vendors are stretching for a 32GB/s goal!

Now for the nitty-gritty. What it the under-the-hood technical difference between NVME and SATA SSDs?

We’ve already established that SSDs have a clear speed advantage when pit against mechanical hard drives, but they could be faster.

SATA does not allow SSDs to function at their full potential, unlike PCIE.

So why is it that we still use SATA for SSDs? Well, SATA has been the standard for storage for years, and the natural response to flash storage in computers was to adapt SATA to function with these new drives.

Right now we’re in a transition period, the massive bottleneck of SATA is apparent when compared to that of PCIE devices, it’ll just be a bit before it fully phases out.

PCIE, as stated before is a faster alternative interface for SSDs. They can take the form of motherboard PCIE slots or M.2 slots, but PCIE was not made for SSDs, it’s the other way around.

What NVME does, is create an optimized standard for SSDs that was built from the ground up to provide the best possible transfer speeds.

Benchmarking time! For the following comparison, we’ve selected the Samsung 970 Evo NVME SSD and the Samsung 860 Evo SATA SSD, two of the most popular from each class for a head to head of raw speed. Let’s begin.

If we take a look at the average benchmarks of both SSDs via the over 200,000 Userbenchmark benchmarks for these drives, we get the following results. 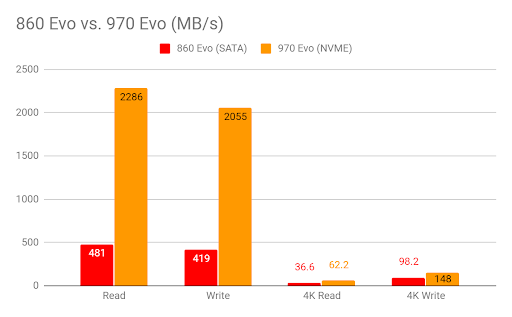 These numbers are honestly staggering. There is once again no argument to be made in who the winner is with that much of a performance gap.

The 970 Evo comes out on top in all categories, boasting gaps of 1,805MB/s and 1,636MB/s in theRead and Write categories respectively. There is less of a gap in 4K read and write, but still quite noticeable.